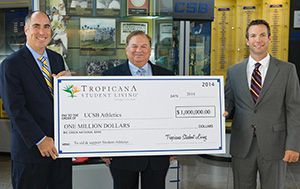 SANTA BARBARA, Calif. – Tropicana Student Living and UCSB Athletics announced a $1 million commitment to the school’s Intercollegiate Athletics program Friday. The gift from Tropicana Student Living, a gift intention made through the Gaucho Fund to be paid over several years, will be part of The Campaign for UC Santa Barbara, the university’s comprehensive campaign approaching one billion dollars to benefit university programs, students, faculty and staff.

“We have long appreciated the enormous effort that UCSB Athletics’ coaches and players have done to excel at their sport and reach out to our UCSB students as well as the youth in the local Santa Barbara community,” explained Kent W. Dunn, Managing Principal of Tropicana Student Living. “Through our daily work with the University, we have become aware of plans that are actively underway to enhance several UCSB Athletic facilities.”

“We are so appreciative of this commitment from Tropicana Student Living and their part in the success of our programs and student-athletes,” said Mark Massari, Director of UCSB Athletics.

The Tropicana Student Living gift of $100,000 for the 2013-14 year, the first of their commitment of annual gifts at the same amount, will bring the Gauchos to over $2.2 million in funds raised — one of the most successful fundraising years in UCSB Athletics’ history. The initial gift will directly support needs of the baseball program, including the planned Gaucho Park entry plaza. Subsequent year contributions will provide broad-based support to all 20 intercollegiate programs at the discretion of the Athletic Director.

Tropicana Student Living operates privately-owned residence halls and apartments for students attending the University of California at Santa Barbara (UCSB) and other local education institutions. Situated on the western edge of campus with a diverse community of undergraduate students, Tropicana Del Norte is a residence hall well known for its comfortable suite-style units, unlimited meal plan and resort-style amenities, while Tropicana Villas is an academically focused apartment community catering to upperclassmen. The Official Student Housing sponsor of UCSB Athletics, Tropicana Student Living also hosts more than 90 summer camps annually and has been the summer home of Michael Jordan’s Flight School since 1995.

“Tropicana communities provide a living environment that supports a successful transition from home to independent living and academic success by following a wellness model that encompasses the physical, spiritual, emotional, intellectual and environmental elements of student life and growth,” Dave Wilcox, Tropicana’s Executive Director said. “Our management team, most of whom live on site, works closely with campus officials to ensure that our community policies are consistent with campus missions and policies.”

“Tropicana’s student residents—athletes and non-athletes alike—are outstanding in every way,” Dunn said. “They are talented and hard-working and reflect the greatness of a world-class institution. We are grateful for the opportunity to be partnered with UCSB to serve them.”

UCSB student-athletes have an 85% NCAA graduation success rate – second highest within the University of California system. UCSB is one of only 62 members of the distinguished Association of American Universities (AAU). The university’s 450 student-athletes compete across 20 NCAA Division I sports. 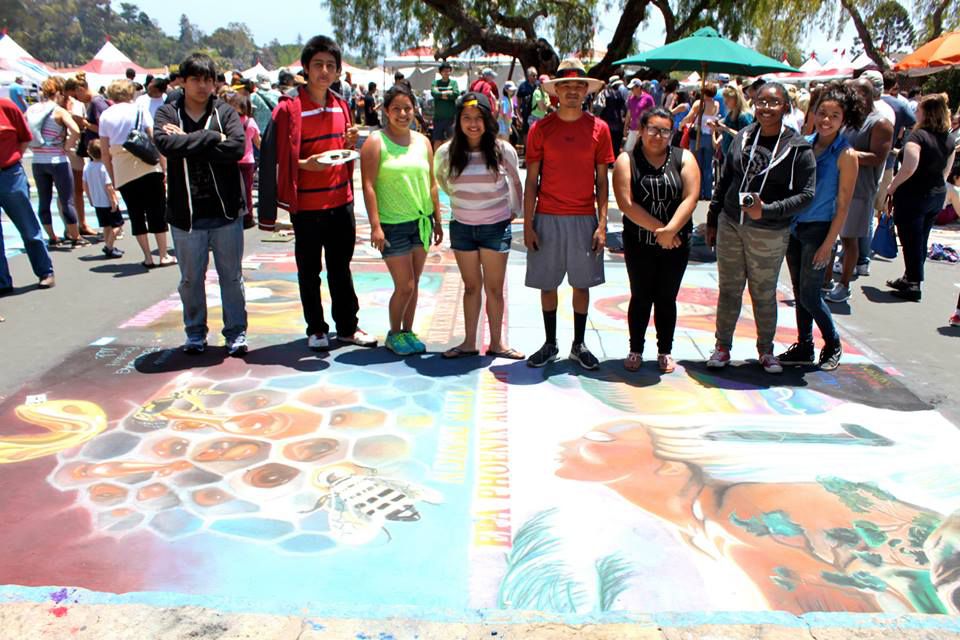 Isla Vista hasn’t been seen in the greatest light the last couple weeks, and we want to show that our students are doing great things here at Tropicana Student Living,” says Dave Wilcox, Executive Director of Tropicana Student Living. “This is just an example of something that they’re doing that’s great for the community and great for the world.” The 7,500 meals that the Tropicana students and staff assembled will be distributed to Guatemala through Stop Hunger Now, an international hunger relief agency that ships them to school feeding programs in developing countries.

Stop Hunger Now coordinates the distribution of food and other life-saving aid around the world, with a mission to end hunger in our lifetime. Stop Hunger Now’s meal packing program began in 2005, and since then, more than 100,000 volunteers have packaged nearly 30 million meals to feed the world’s impoverished.

Tropicana Student Living Rolls out a New Name and Look 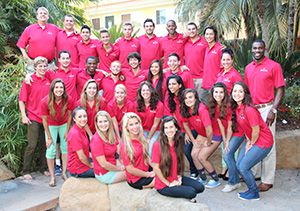 “We feel that the name Tropicana Student Living better aligns with our mission and identity,” said Dave Wilcox, Executive Director. “We are very proud of the superb undergraduate living experience that we deliver to our residents with our extensive residential life program, tropical-themed communities and dedicated staff.”

For the rebranding project, Tropicana turned to Kosaka Design. “The new Tropicana Student Living brand embodies those special years as a college student,” said Wayne Kosaka, Creative and Brand Director. The bird of paradise flowers forge a home that symbolizes living, support and sustenance that reflects Tropicana Student Living’s reason for being.

Santa Barbara, CA – August 1, 2013 – Tropicana Student Housing is proud to welcome Michael Jordan Flight School 2013 basketball camps for the 18th year. Campers, who range in age from 7-18, will be staying at Tropicana Gardens and Tropicana Del Norte residence halls. With its convenient proximity to the UCSB Thunderdome, Tropicana’s residence halls are within easy walking distance for the campers, with suite-style accommodations and an on-site Café for meals.

“Every year, I am so excited to work with the Michael Jordan Flight School and their staff. They are so professional, organized and they really work hard for all their participants to have such a great experience.” said David Wilcox, Executive Director. “I believe this is why they have so many participants that come back every year!”

Mark Raveling, Michael Jordan Flight School Camp Director, says, “We have been hosting the MJ camp at Tropicana and UCSB since 1995 and always look forward to coming back each year. We are excited for our 18th year.”

Isla Vista, CA – June 25, 2013 –Tropicana Del Norte announced the winner of its Apple iPad sweepstakes this week. The lucky winner was Edward Gaspar of Huntington Beach, California, who entered for a chance to win an Apple iPad after taking a tour of Tropicana Del Norte Residence Hall for UCSB Students. Gaspar is a Group Lead for Logistics at JC Penney. His daughter, Cynthia, a Southeast High School graduate, will be the first member of the family to attend UCSB as a freshman next year. She is undecided, but may major in Biology.

“We were delighted to give Mr. Gaspar and his family a tour of Tropicana Del Norte Residence Hall, said Dave Wilcox, Executive Director , “and we hope that he enjoys his new ipad.”

Winner Gaspar said he will share the iPad with his family. “I am so surprised; I never win anything!”