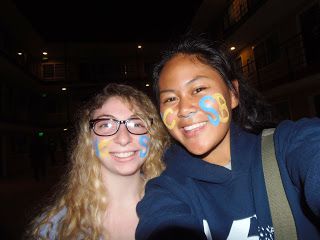 There’s loud music blaring in the courtyard, students are all decked out in their blue and gold gear, several people are sporting UCSB facepaint… what could that be? Well, a number of things, actually, but this time, Trop’s going to the soccer game! We’ve got our school spirit up and roaring and our tortillas hidden safely in our pants, hoods, and anywhere else they won’t check! It’s GAME TIME!

UCSB vs Cal Poly San Luis Obispo is kind of a big deal. They’re our biggest rival, and it’s important to kick their butts! And have fun while doing so, of course. But still, kick their butts! And throw ALL the tortillas when we make goals and win! I can’t really say more about how important it is to beat SLO, not because I’ve said enough or even because the need to win is that strong, but because I’m kind of a noob with sports, and I know next to nothing about soccer. I mean, I know that goals equate to points and goalies are like Keepers in Quidditch, but that’s really about it.

This game is important on a personal level too, because it’s the first official sporting event that I’ve been to in my life. Ever. I’d never been to high school football or basketball games, or been to a Laker game, or anything like that, so I was super stoked to be going. But because I know nearly nothing about soccer, I came basically just so I could be loud and raucous and throw tortillas than to actually see players play. Oops. Well, going to the game was free, anyway. So I figured, why not?

There was nothing really going on in the first half of the game. At least, until the last ten minutes. Then we made a goal! Yay! Then it was halftime and we momentarily got to sit down, which was really nice. When the game started again, it was more exciting and more intense knowing that we were in the lead. The second quarter mostly consisted of trying not to let SLO get the ball. We made another goal in the last five minutes, which was great, and tortilla madness rained on us all.

All in all, it was a great experience to go to my first game. It was fun partaking in UCSB chants and rituals, like counting down to 4:20 or making fun of the opposing team. People get so into it. It was so crazy, but also kind of amazing.

I probably would not have gone to the game, had it not been for where I live. Tropicana del Norte is really awesome, and I thank them and all the RAs that work so hard just to give us cool events like a pre-game sesh, among other things. It was awesome seeing everybody so pumped and so psyched. Before the year started, I had multitudes of people telling me that “You end up being really proud of your first dorm,” and “School spirit is contagious.” At first, I didn’t really see any of that becoming a reality. I thought they were insane, die-hards who were too happy to be in school. But now I see that yeah, they’re kinda right. It happens.

Vera is a first-year student currently residing at Tropicana Del Norte. She is pursuing a major in Bio-psychology and a minor in Spanish. An LA native, she loves the sounds of freeways and commercial jets taking off. She also enjoys photography, playing the piano, reading, surfing the web, and doing her nails.